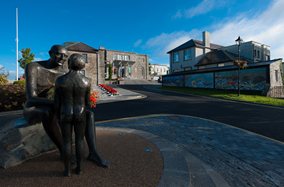 Carrick on Shannon is preparing to celebrate a major landmark in the town’s history as 2013 will mark the 400th anniversary since King James 1st first granted the town charter.

To celebrate this historic occasion a twelve month festival programme of events has been launched. The festival programme will be held throughout 2013 incorporating the arts, music and sport. In tandem with ‘The Gathering’ initiative Carrick on Shannon natives from all over the globe will be encouraged to return to the town along w

ith tourists from within and outside of Ireland to join in the celebrations.

The 400th anniversary celebrations begin in February 2013 when Carrick Rowing Club, the oldest rowing club in Ireland (177 years old in 2013) will be hosting the ‘Head of the Shannon’ on the 23rd February. The 2013 celebrations will officially be launched in March 2013 and following this will be a series of events throughout the year including: (to name but a few)

For a full list of events and festivals taking place in Carrick-on-Shannon next year please check out https://www.facebook.com/EnjoyLeitrim/events

Check out http://www.carrickonshannon400.ie/ for the latest information on news and events taking place throughout the 2013 celebrations.